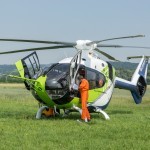 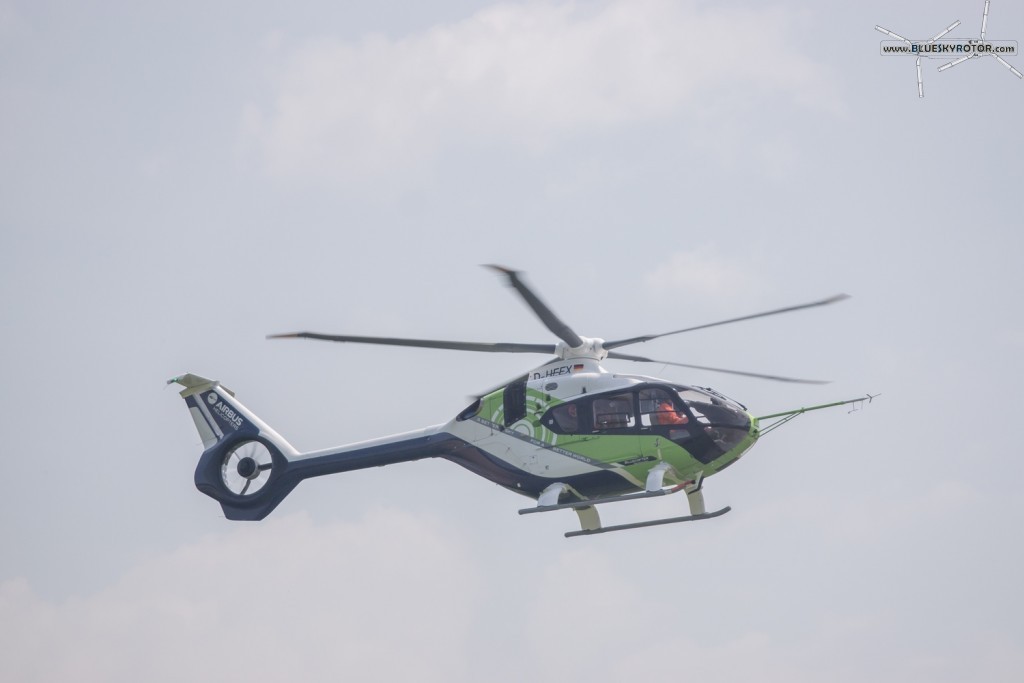 July 07th, 2015. Airbus Helicopters presents its brand new prototype of a modified H135, featuring extremely low noise in flight. A reduction of no less than 10 EPNdB (perceived noise), corresponding to a reduction by 90 percent of the noise of a standard H135 helicopter. (More information on icao.int, wikipedia.org/EPNdB, or wikipedia.org/Loudness. To refresh your logarithmic knowledge on the dB, check this.)

The aircraft displays an unusual shape to those familiar with the product family: T-tail horizontal stabilizer, new rotor blades…

The blades are already known from the H160 and the Bluecopter Dauphin. They result from a research programs in cooperation with the french ONERA and the german DLR. The tail rotor blades are shaped as waves and result in a barely noticeable noise in flight. Only the Turbomeca Arrius 2B2 PLUS turbine is left with what seems to be a normal installation. Now, the noise emission of the engines feels very loud compared to the dramatic improvement of the blades!

During cruise flight, Airbus claims to shut off one engine, reducing the consumption and the carbon dioxyde emissions. Of course, safety measures may ensure rapid power-up in case of need, if not urgency.

With this display, Airbus Helicopters sets a new standard of low noise emissions for the helicopter industry. 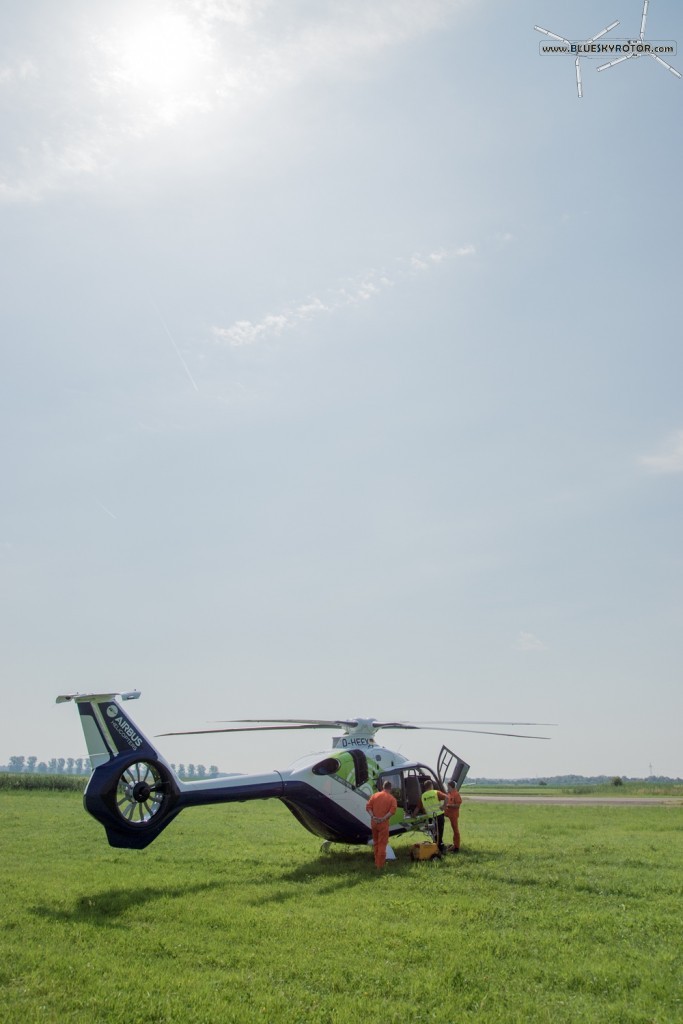 Bluecopter between the green grass and the blue sky

The green and blue paint has obviously been inspired by the Bavarian country. While awaiting for the flight show, blue skies and green grass were present. With QNH 1013 and more than 30°C at 1300 ft terrain altitude, ISA+15°C was easily demonstrated.

The aircraft is actually not brand new. The structure is the first prototype (S001) of the EC135 T, which first flew in 1994. The fuselage can be noticed on this early photo. 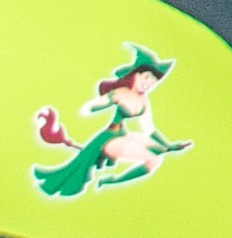 Maybe you will have noticed the small drawing on the pilot door: what is this cartoon? The green witch, die grüne Hexe in German, was probably inspired by the callsign D-HEEX. Does it go further and compare to the Greenwich meridian? Does she want to set a new reference?

Looking carefully at the vertical tail fin, you will notice a rudder. Is it the same tail fin rudder as the H160? 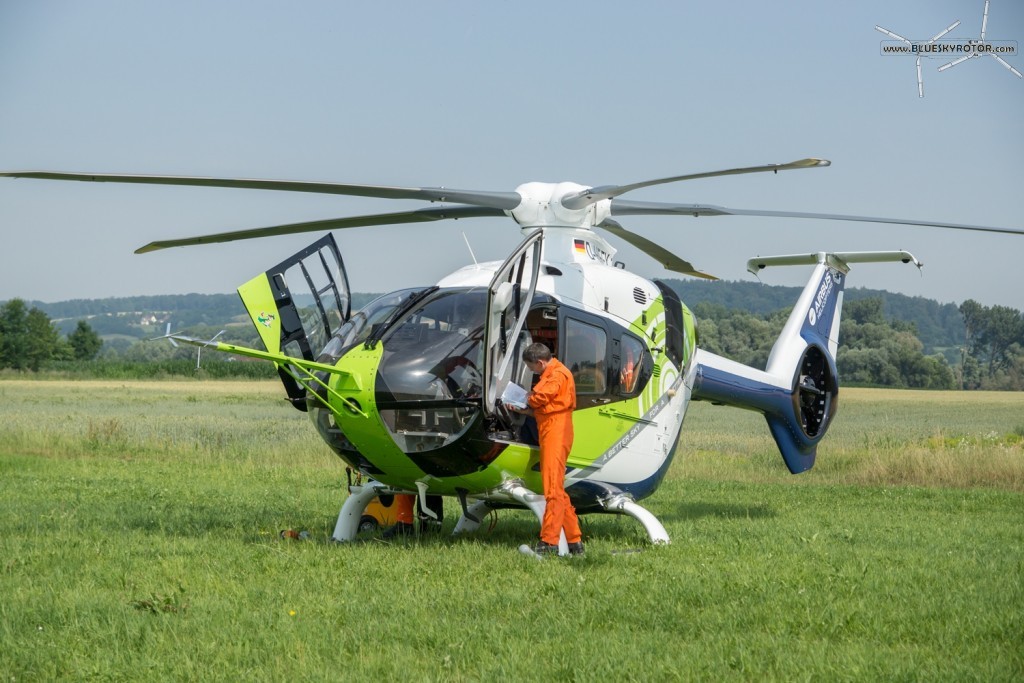 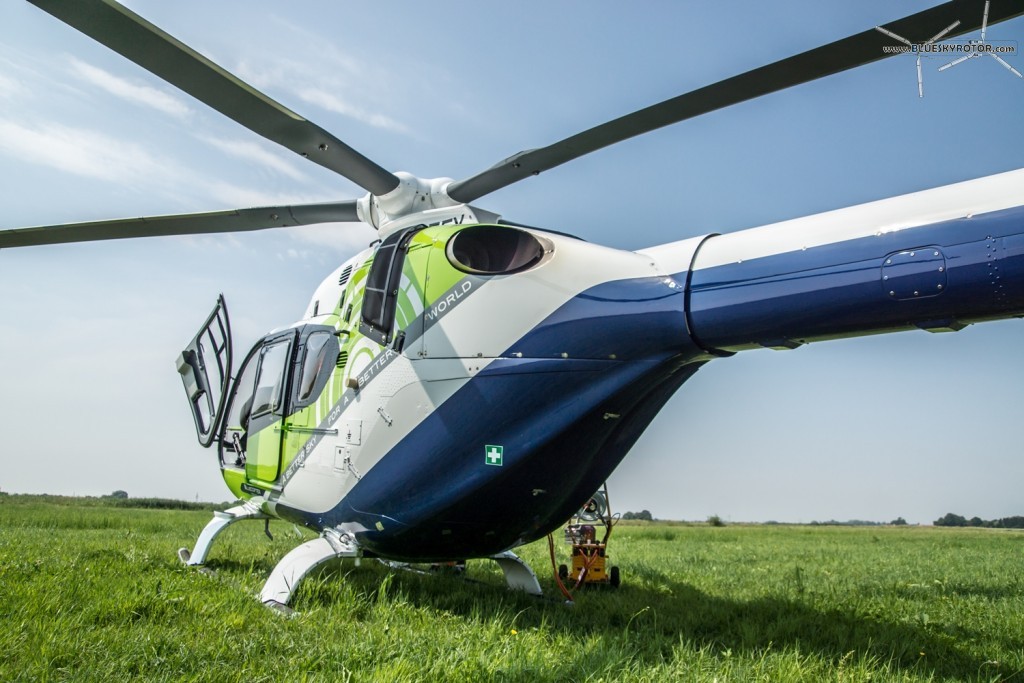 The particular shape of the clam shell doors, designed to reduced drag 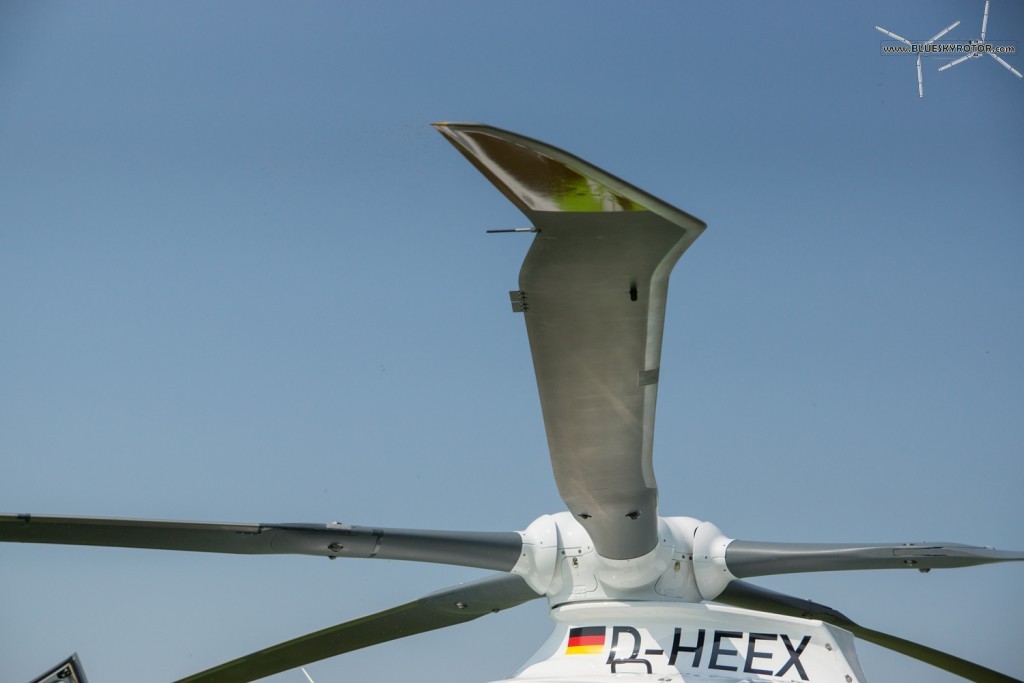 the tip of a blade 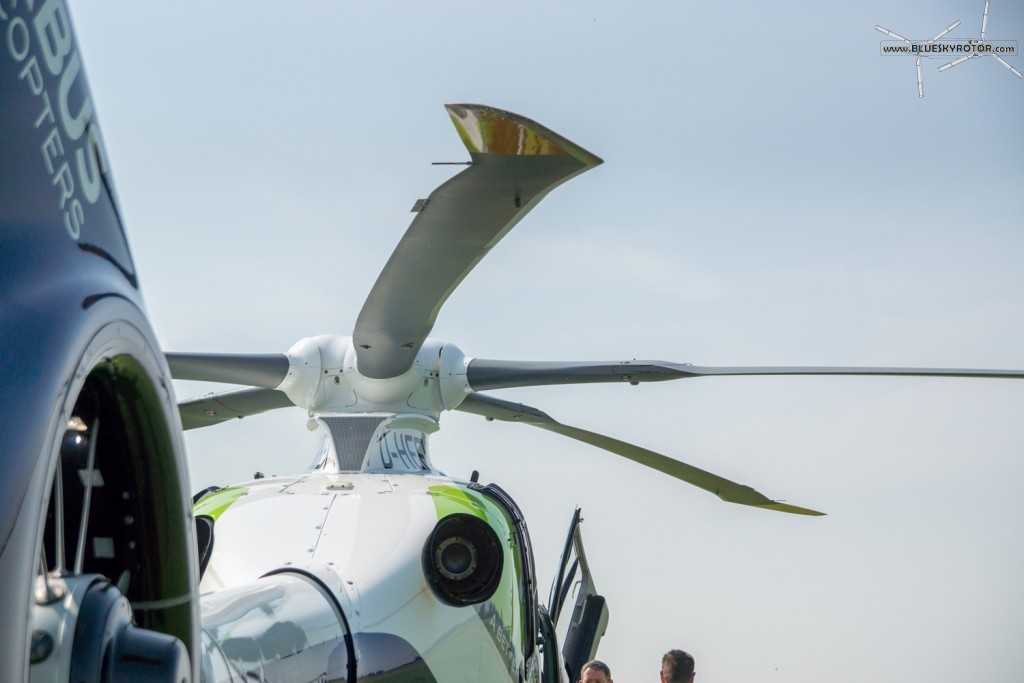 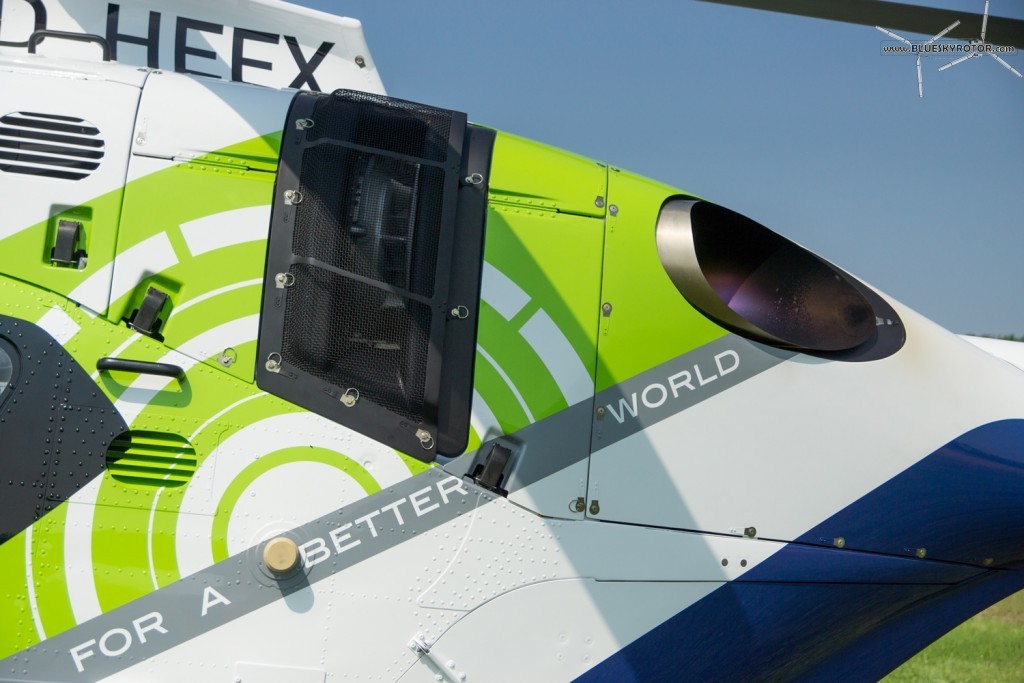 Air intake of the Turbomeca Arrius 2B2 PLUS 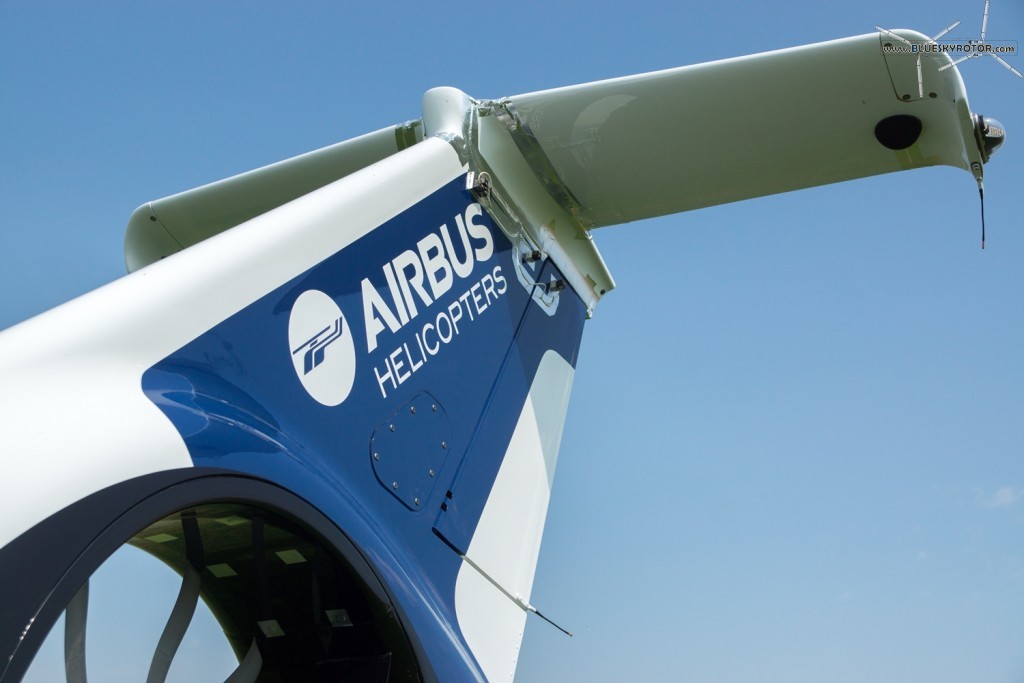 The T-tail horizontal stabilizer of the Bluecopter, made by Airbus Helicopters 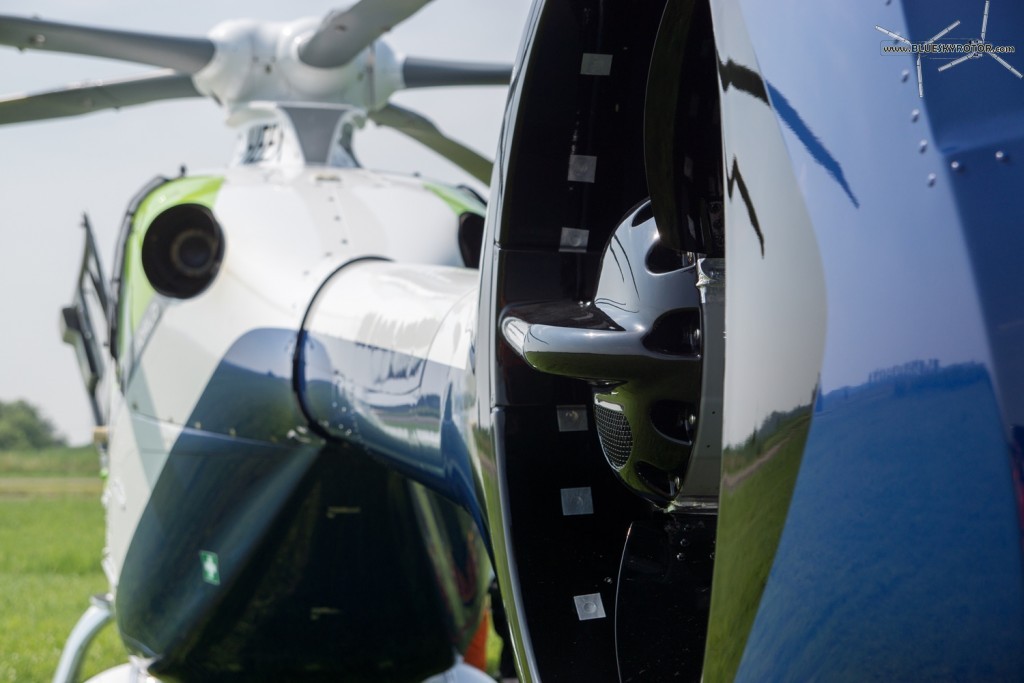 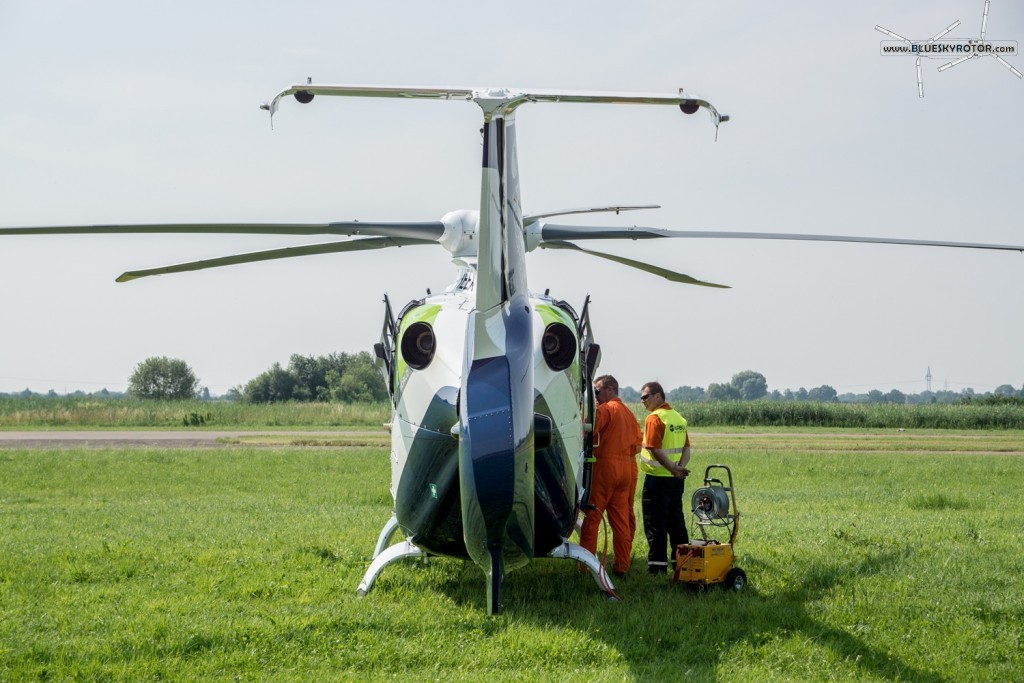 Bluecopter from behind the Fenestron 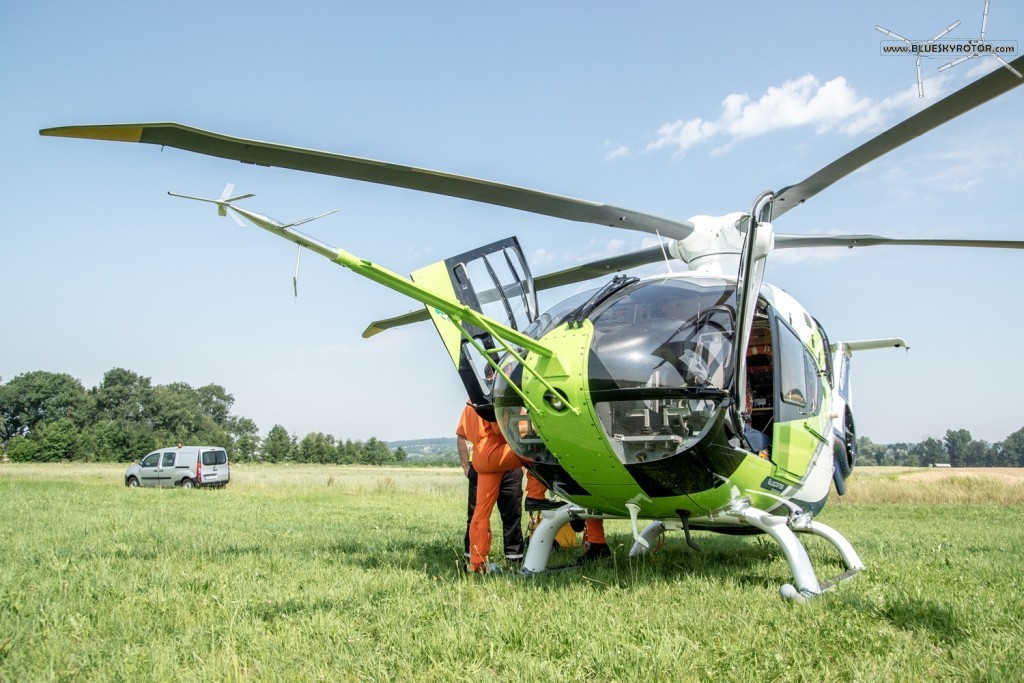 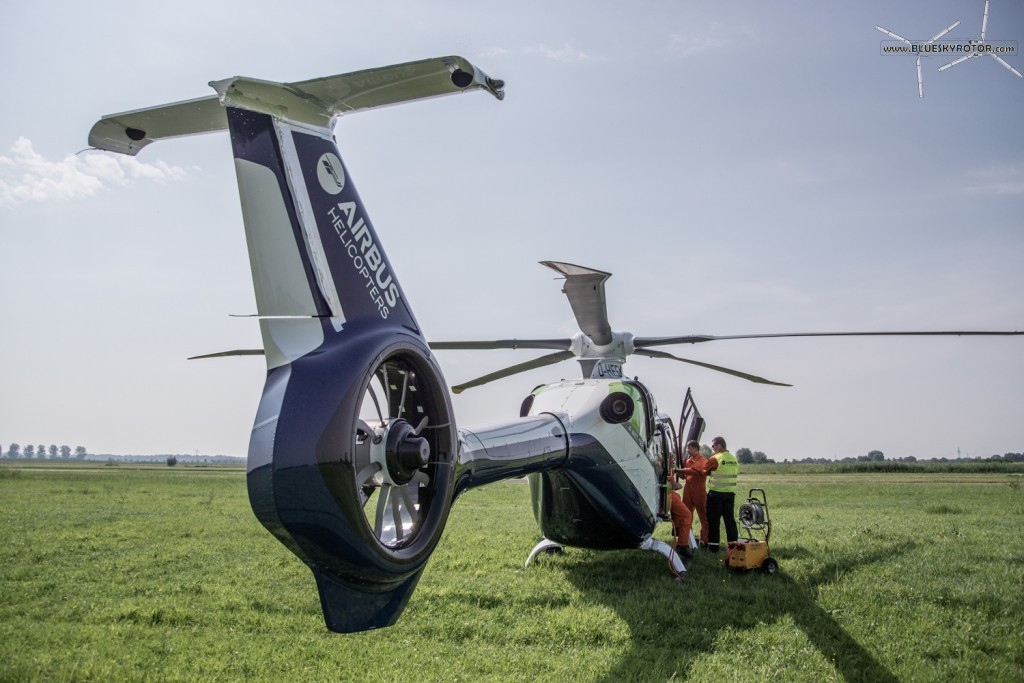 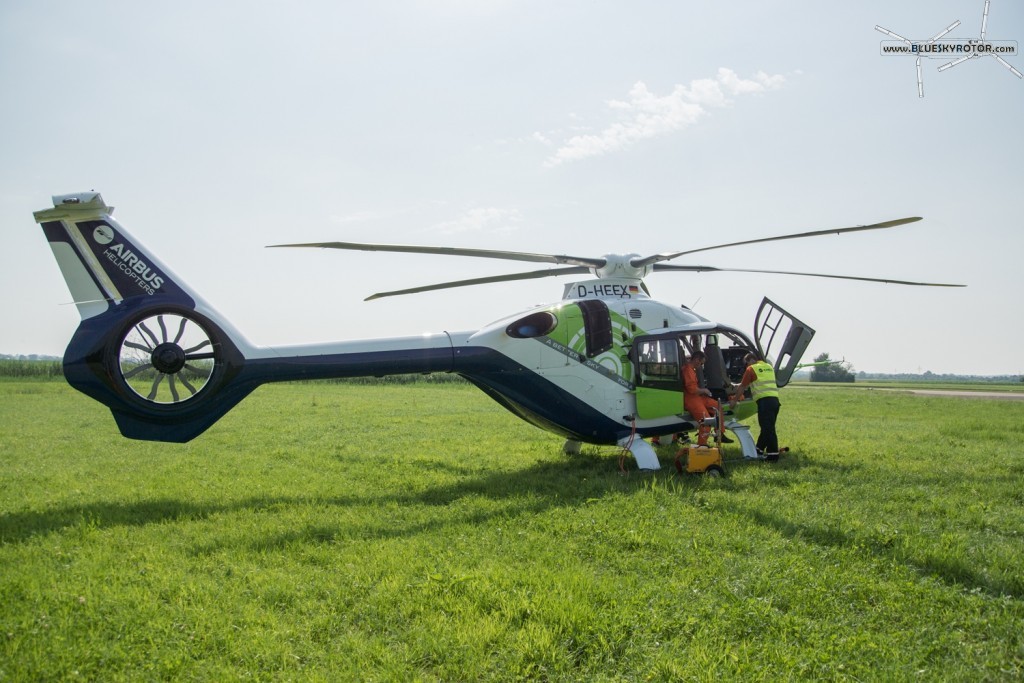 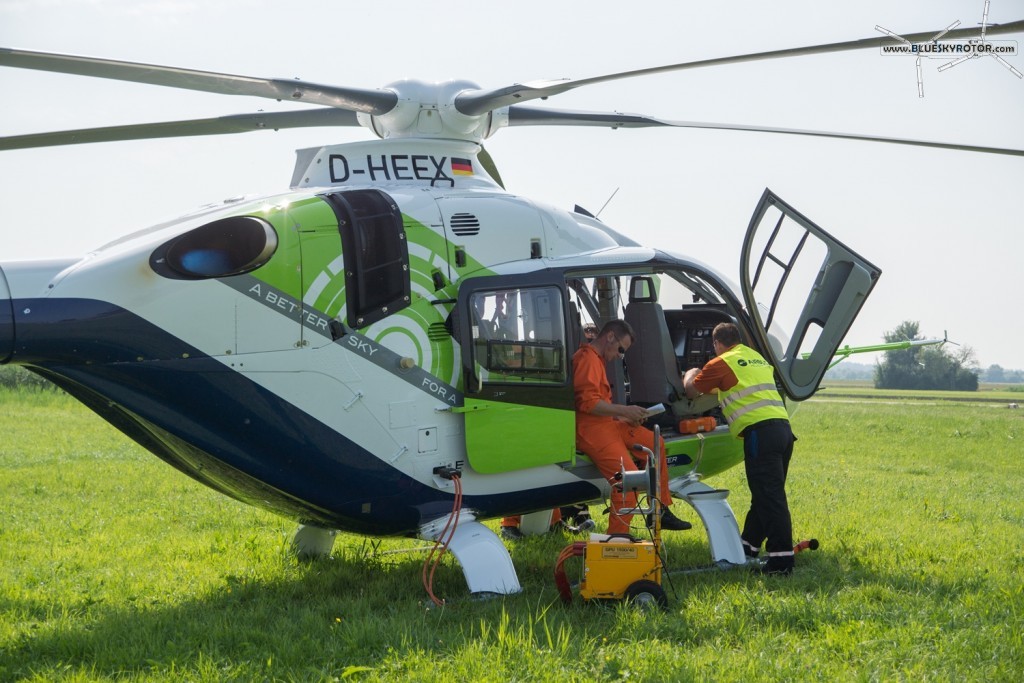 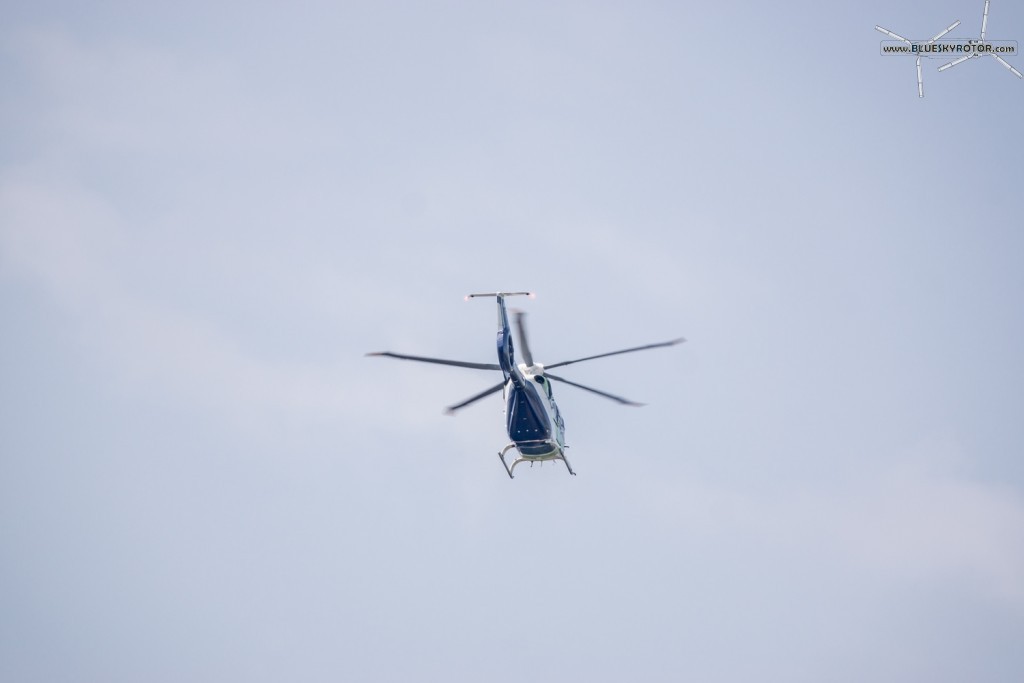 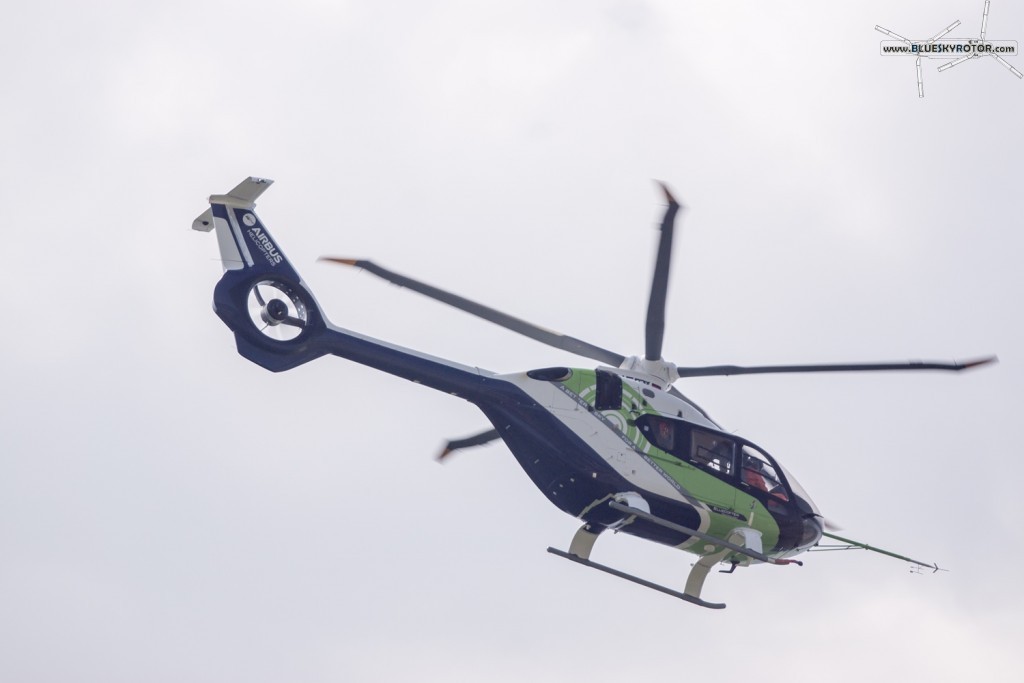 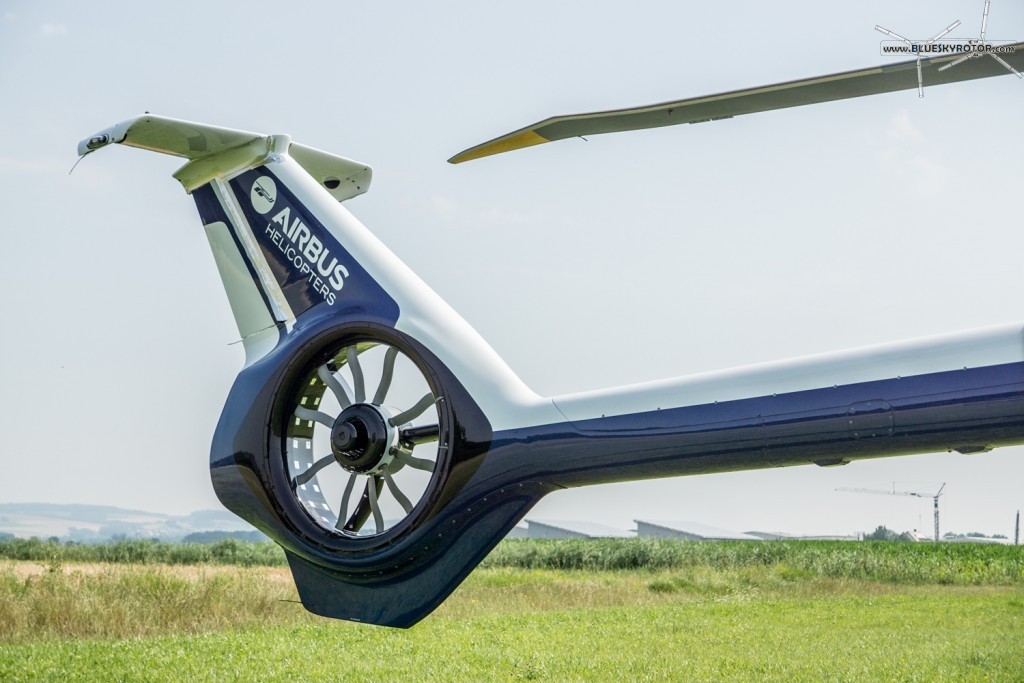 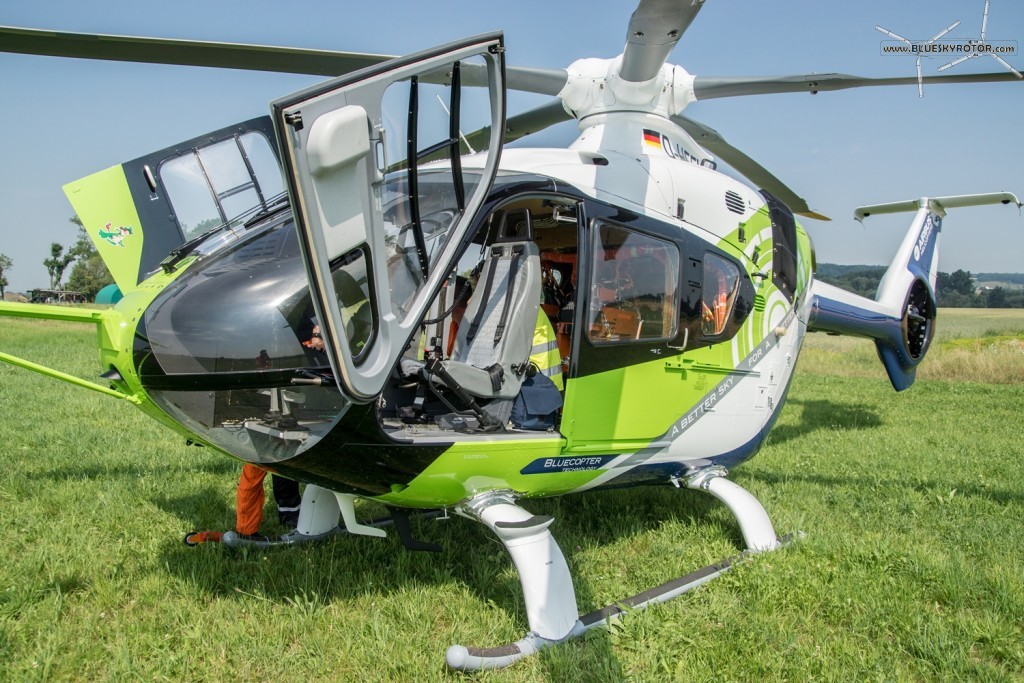 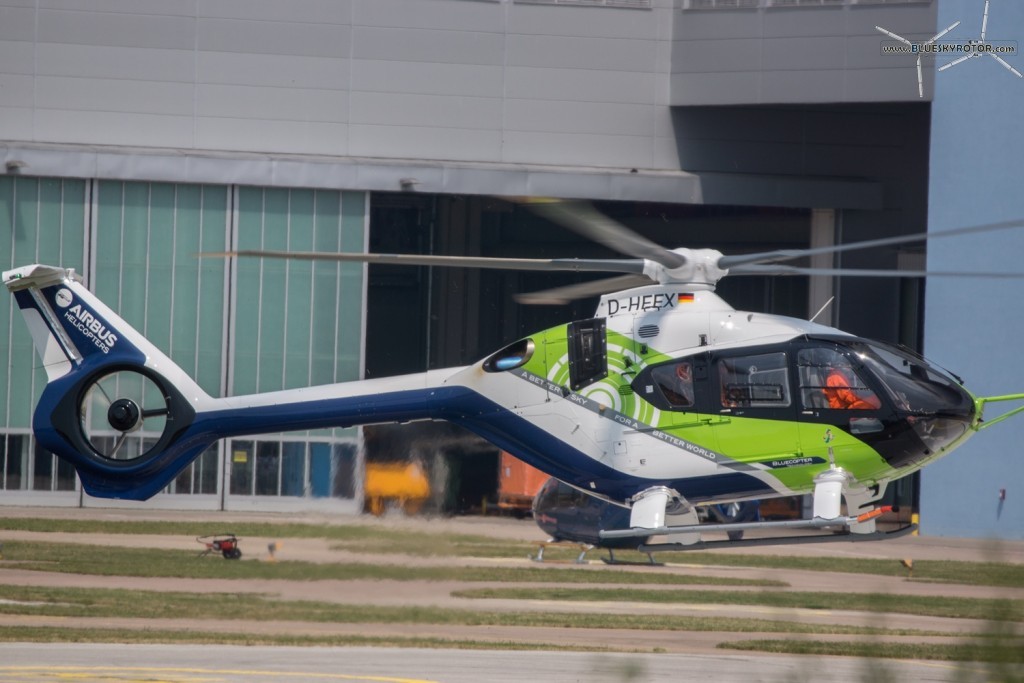 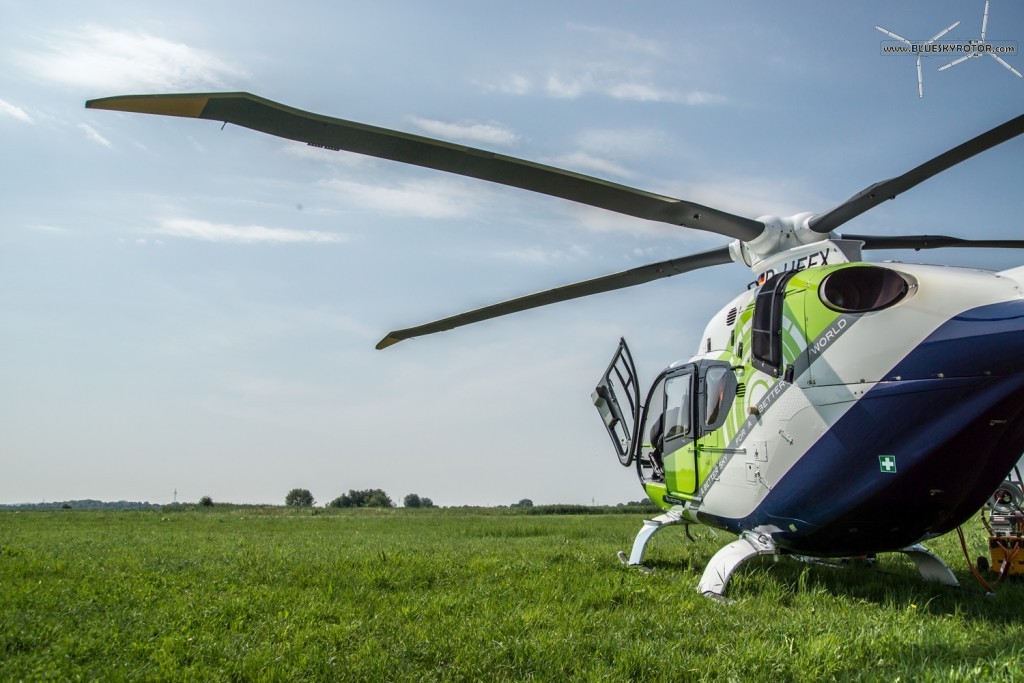